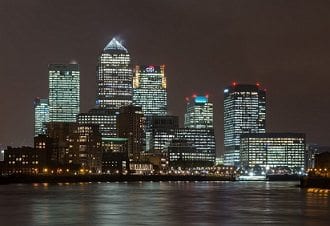 According to a report from Knight Frank, Canary Wharf will record the strongest office rental growth this year  with a 12.8 per cent rise in rents, those attractive and  imposing office towers lagged slightly behind other  districts last year.

Rents are becoming increasingly unaffordable for small to medium-sized firms in London’s popular east end and on  Crossrail which is just two years away.

It looks very much that Canary Wharf is  set to come back into vogue, in one major deal Deutsche Bank will this year move 4,000 staff from the City to new offices at 10 Upper Bank Street in Canary Wharf.

Rents in Shoreditch, driven by expanding technology firms, are expected to  continue to surge, although at 10 per cent this is more than half last year’s rate of growth, rents around Aldgate, an area that has become increasingly popular with the fintech firms are set to slow to 9.1 per cent from 23.8 per cent last year according to the report.