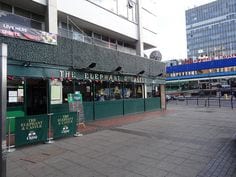 Foxtons the Estate Agents represented by Agents Montague Evans  notified Southwark  Planners in April that they intended to open a Branch of their Estate Agency in the pub known as the Elephant and Castle.

The current Elephant & Castle pub is on the corner of New Kent Road and Newington Causeway, it  took the place of the original tavern that gave the area its name.

In a recent community website report it stated: In a letter to the council, agents Montagu Evans explain that – so long as the pub is not listed as an asset of community value under the Localism Act – they don’t need planning permission to change the use of the building from class A4 (pub) to class A2 (finance).

If the pub is not nominated as a community asset within 56 days of Foxtons’ request to the council (dated 16 April), then the change of use is automatically permitted.

In another area of London “The Star” a former public house in St John’s Wood  has been used as offices since March of this year by  Champion Estates, following an unsuccessful attempt by the owners to demolish and to build luxury flats on the site.

This is certainly the  war of Property versus Pints.