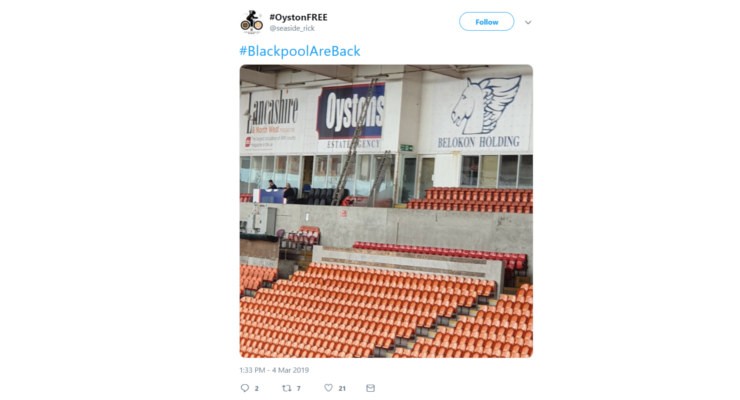 Blackpool football club have taken down the Oystons Estate Agency sign from their stadium to the delight of many of their fans whom resented it being there. Bloomfield Road is the home of the famous football club Blackpool for whom Stanley Matthews was one of their most famous players.

On 25 February 2019 Oyston and his daughter, Natalie Christopher, were removed from the board of Blackpool Football Club. The family owned Oyston Estate Agents who became the biggest group in the UK and were sold back in 1987 for an estimated £37 million to Royal Insurance.

Tweets today with hashtags of OystonOut and BlackpoolAreBack including images and video of the sign being removed were posted today on the @seaside_rick account.

“Blackpool fans rallied round to raise cash for new ‘Bertha’ flag ahead of homecoming game and the sign has been removed ahead of this weekend’s homecoming match against Southend United, where thousands of fans are set to return after boycotting the ground under the now removed Oyston regime.” Read more on the Blackpool Gazette website.