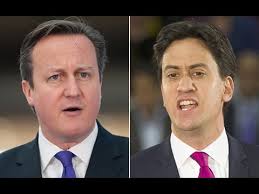 Last night we saw the first  pre-election TV “debate” which strictly speaking was not exactly a debate, both Cameron and Milliband were both  seperately interviewed by Jeremy Paxman and  again they seperately  took questions from a studio audience.

There was no clear “winner” as such, they were pretty well evenly matched, polls carried out by ICM for the Guardian and YouGov for The Times both had Mr Cameron marginally ahead. Labour supporters must have been relieved to see Mr Milliband give a reasonable presentation of himself, there was no apparent stumbling, in fact he dealt reasonably well with some tricky questions from Mr Paxman and the audience, normally on balance Mr Cameron is seen as a clear winner on personality stakes when it comes to a contest out of the two.

The scene appears to now be set for the closest  polling results for a generation, last nights televised event gave an opportunity for the political leaders to achieve a breakthrough in the polls, currently locked in virtual parity between Labour and the Conservatives. We now have one down and a further three debates to go as we run up to 7th May polling day.