How Agents Win At Social. Video: 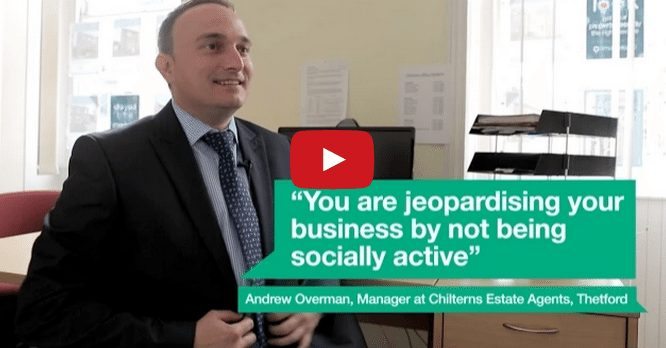 The estate agencies making social media an integral part of their strategy are seeing huge returns.

It’s all good and well being preached industry success stories, but it’s rare to hear from the horse’s mouth the story behind them. We recently interviewed Andy Overman of award-winning agency Chilterns Thetford to find out why they use social media so avidly and the secret behind their success.

If you are at all skeptical about the power of social media in this industry, or believe you don’t have the available time to make it work, take five minutes to soak up Andy’s wisdom and prepare to reconsider. If you want to scale your efforts online, read on, because Chilterns sold 80% of their stock at an average £2,500 fee last year (9 properties as a direct result of a Facebook post), and continue to win instructions as a result of their social presence.

When Andy first started on his social media journey five years ago, he was faced with skeptical directors, and in what Andy describes as an “archaic” approach, these execs were fearful of exposing the company online. Andy’s defence? “Our heads are already above the parapet – we’re getting shot, we just don’t know it.”

This is important: In today’s world, it is no longer a choice to be on social media – you already are. The choice is whether you want to join the conversation, or be left out and risk a competitor swooping in.

After successfully convincing the “dinosaurs” to give him a shot, Andy set up Chilterns’ social media presence and now sports over 5,000 engaged followers across Twitter and Facebook. The company are generating consistent referrals and enquiries as a result of their activity, to the point where Andy thanks non-social agents for effectively giving him more business, but warns: “you are jeopardising your own business by not being socially active.”

If you take one thing away from this post it is this: Social media is providing Chilterns with a competitive advantage. The network of professional contacts they have across the UK; the public image they have built as active, knowledgeable and helpful experts; the substantial reach to an audience of potential sellers – for these reasons and more, Andy continues to treat social media as an integral part of the company’s strategy.

Chilterns Thetford clearly have social down to a tee, but they chose to use Propertyflock in order to scale their efforts. In what Andy calls “a perfect marriage”, he explains how Propertyflock has made social media less time consuming and more rewarding. As a result, Chiltern’s following is growing by an average of 60 people per week and – unlike the cardinal sin of buying followers – these people are genuinely interested in what Chilterns has to say.

Another important point: With the technology available today, winning on social media doesn’t need to involve the time and effort it once did.

All in all, Chilterns have not only established themselves as industry influencers, but are winning reputation, awards and instructions through social media. Key takeaway from Andy: “Wake up and smell the coffee agents… social media isn’t going anywhere”.