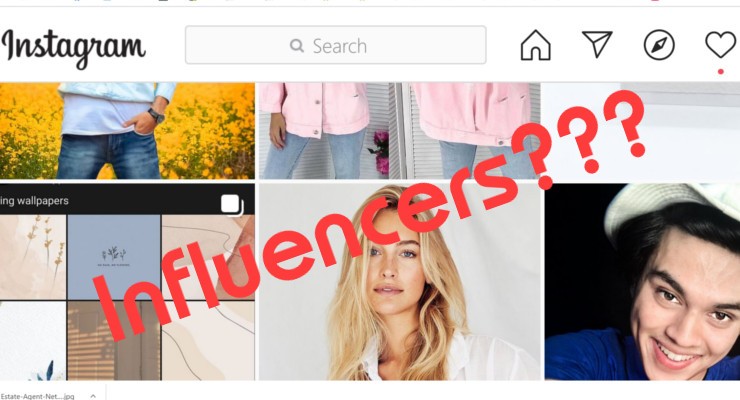 It’s arguably a growing trend across many business sectors, the adoption in some form of influencer marketing.
For many years it has been used, from celebrities advertising insurances in TV commercials to wine critics sharing their tasting notes in published reference books. Consumers are widely led by peers, if we see a name / person that we like and trust then it’s likely that the products / services they suggest we will embrace.

Sometimes influencer marketing is done by consumers, I remember my business coach relaying the Apple iPhone sales growth model relying a lot in their fans sharing their latest iPhone versions with their friends and family. Some consumers were ‘raving fans’ and simply doing the on the ground marketing for them such as at he pub saying ‘Here’s the latest iPhone, look at what it does, you really must get yourself one.’ and then on to the next person expressing an interest…

Not only have we television, magazines, radio and more for influencer marketing, we also have the ever expansive internet and more precisely today, we have social media – Many influencers are circulating around the likes of Instagram, Facebook and YouTube from celebrities of film and television to celebrities of social media.
What exactly is an influencer?

“A person that can effect the buying decision of another and is likely to have a substantial target audience reach.“

This is of course just a brief description and there are many influencers effecting many different aspects of business. Some would say that you can not define what being an influencer is exactly, there is no mould neither a book of instructions / how to be one. I like to say that you will know when you become an influencer as others around you are asking your opinion and following you because of the information you share.
For the purpose of this article I would like to look at influencer marketing on social media.
Social media has given birth to many new celebrities away from television, theatres, radio, movie studios etc – Many people who show their face on their social media accounts are, for some, house hold names very quickly. From talking about football to discussing latest make up tips, the likes of visual social media channels such as Instagram, YouTube and Facebook have many high paid (sometimes millionaire) individuals who are not only celebrities in their own right, but also high earning influencers.
Big businesses have very much involved themselves in snapping up these social media influencers, many have their channels sponsored or are paid to speak about / review items and services from paying clients. The power many influencers have is in their audience and to a degree, the bigger the following they have then the greater the influence they command (and prices they charge).
No matter what business sector you can think of, there will be an influencer on social media who is entertaining a target audience that will be highly valuable to those looking to sell products / services in that space.

“Going back a few years, I got an invite to a private influencer party in London. I remember it very well, it was focused on car reviewers and if you saw the cars parking up outside the venue of no less than £100,000 each you’d gasp as I did and what was even more surprising was that the drivers were no more than 21 most of them. The party itself for the guests was mostly Champagne and cocktails and discussions on latest releases from the supercar ranges, the growth of their communities (mostly Youtube) and what was another draw dropping moment for me, the monthly revenues they were earning as influencers.”

Do Influencers earn a lot of money? I can confidently say yes, but we must acknowledge that the very top influencers do and there are simply millions of lesser known and aspiring influencers who do not.
Is it easy to be an Influencer? No. It takes a lot of time, commitments and for many capital also. You need to be knowledgeable in the sector you are targeting and work constantly towards building, and equally as important, maintaining your audience. If you are using a social media channel then you need to be updated on the guidelines as many times there will be certainly words / images / videos which would break rules and acquire you strikes, banning and at worst, suspension.
Are influencers effective in marketing? Absolutely. Determining what / who is an influencer really depends on the market they are working in and the size and activeness of their audience. It will be important to study influencers and their audiences (many times audiences can be purchased and thus are fake), monitor the engagement their posts get and then approach them to see if they take on sponsorship and what the costing is. Ultimately, businesses can effectively reach big audiences via influencers and increase their customer databases and client loyalty.