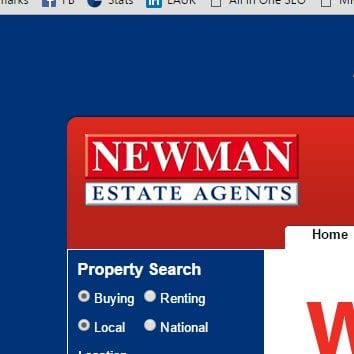 Back in October, I launched a competition seeking an Inspirational Agent.  Fed up of constantly seeing negative press about our industry, I wanted to highlight and celebrate the wonderful work thousands of estate agents undertake every day.  As nominations started to come in I felt proud, these were stories of kindness and told the story of a different kind of estate agency, the true picture of our industry that never gets published.

The small team of judges went through the often very emotional statements and came to the conclusion there was one clear winner.  Head Judge, Martyn Baum stated: “I recently attended the inauguration of Tom Salomone as he became president of the National Association of Realtors. His mantra for this year is “exceptional people do what’s expected of them and then some”.  Our winner epitomises Tom’s thoughts.

Hannah Gill from Newman Estate Agents had no idea she had been nominated until she received the call to say she had won.  “I couldn’t believe it,” said Hannah, “it wasn’t something I consciously did, it was something that just felt like the right thing to do.”

“I went to value Mr Cave’s home about a year before it came on the market, shortly after he was diagnosed with cancer and decided to stay put.  As his condition deteriorated he decided to put it back on the market, I knew someone looking for such a property and managed to sell on the first viewing.  During the sales process, Mr Cave became extremely poorly and moved to the hospital and later Myton Hospice.  During this time Mrs Cave and I became friends, I would pop in for a cuppa on the way back from appointments, take her for dinner or drop off a take away to make sure she was eating and give her lifts to and from the hospital when she was stuck.

We would often visit the local pub and Mrs Cave would tell her husband of the ‘incredible burgers’ we would have.  Mr Cave wished to spend his last days at home and asked me to pick up one of these ‘incredible burgers’ for him, sadly a few days later he passed away.  By this time, we had become very close and I helped her with bits and pieces she needed for the funeral such as finding a piece of music she desperately wanted to be played.”

Are you still in touch?  “Yes, we speak most days, she lives in Durham now and we are going for a visit in a few weeks.  We often meet up to watch her son who competes in stock car racing.”

What does winning this competition mean to you?  “It means so much, but I don’t think I did anything that other people wouldn’t do.”

And, Mrs Cave, what did she feel about your win?  “She cried and said I deserved it!”

The prize was £500 which was shared between Hannah and Mrs Cave for a charity of their choice, they both choose Myton Hospice who had cared for Mr Cave.

I asked Sophie Beresford, Press and Media Relations Officer for Myton Hospices to tell me more about this wonderful charity.  “At Myton, we provide care for people aged 18 years and over, living in Coventry and Warwickshire who have a terminal illness. We have three hospices located in Coventry, Rugby and Warwick and we also have specialist nursing teams that care for people in their own homes (also known as our Myton at Home service). We are the only hospice in the area that provides inpatient beds and we provide care for people with a wide range of terminal illnesses including Cancer, Motor Neurone Disease, Heart Failure, Parkinson’s and Dementia.

At Myton, we passionately believe that the final part of someone’s life is as important as the beginning. All of our services are provided completely free of charge for our patients and their loved ones and we therefore, need to raise over £8 million each year to run our services.  We wish to sincerely thank Hannah and Mrs Cave for selecting Myton. Their prize-winning donation is very much appreciated and will enable us to continue providing the care and support available for our patients and their loved ones.“

A huge thank you to all those incredible and amazing estate agents that go to work every day and give way more than is asked of them.  Agents that care and support their clients to give them a moving experience that will be remembered for all the right reasons.  I hope as an industry we can start to publicly talk and share these positive stories and even in a small way, start to change the perception of estate agents.

Consultant to Estate Agents with the focus of generating more revenue. Over 20 years of industry experience having been a Director of an award winning London Agency.
Facebook
Twitter
Linkedin