No to housing refugees 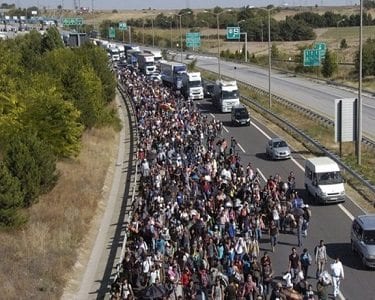 Is there now a change of mood re housing refugees following the Paris shootings and other recent terrorist incidents in USA and  here in the UK? When the pictures of the child washed up on the beach were seen across Europe and the World just a few months back, there was an outpouring of emotion from communities everywhere, no more so than in Britain.

The response by some European leaders to the whole refugee crisis was one of outright irresponsibility, namely Chancellor Merkel and President Holland, they both gave the green light for everyone and anyone to come to Europe, that in itself was a response to a humanity crisis and can be understood, but they went one step too far and allowed free passage across open borders without any control or checking of persons.

Fortunately here in Britain the Shengen agreement does not apply and we still control our borders, the response of our government to the refugee crisis has been alot more controlled than that of Western Europe. The  bad press surrounding the Paris shootings, mostly to do with terrorists using the refugee crisis to infiltrate Europe has had its affect,  there now appears to be a hardening of peoples attitudes in general.

So with a hardening of peoples attitudes to the refugee crisis and an acute shortage of social housing for our existing communities, it comes as no surprise when a District Council votes no to housing refugees.

A controversial campaign to house 200 refuges in Wycombe has been rejected by councillors, almost 40 members of Wycombe District Council voted against last night’s motion to consider welcoming some of most vulnerable refugees to the district.

In recent months, hundreds of residents signed a petition – which was delivered to the council in October – asking for Wycombe to react to the humanitarian crisis.

Councillors have to take very difficult decisions in such circumstances, they have to balance the needs of their community with that of others, I suppose they would have considered the situation very carefully and voted according to the facts presented to them.