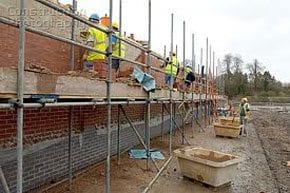 Government targets to build 100,000 new homes a year during the period they are in office could be put at risk due to a skills shortage in the construction industry, which in turn would see rises in wages in the sector.

New research by the Royal Institution of Chartered Surveyors (RICS) has revealed a lack of skilled workers in the construction industry pushed wages up by more than 6% in 2015, with nearly two thirds of those surveyed saying sector wages are continuing to rise.

A shortage of housing is one of the Government’s biggest concerns at present and needs to be addressed without delay, a skills shortage will only add to the problem and will act as a barrier to any growth in the UK construction industry, a recent survey amongst companies confirms there is difficulty in finding both bricklayers and quantity surveyors. The most surprising skills shortage is that of bricklayers, this does not make sense with high numbers of workers coming to the UK from Europe and elsewhere, do they not teach such skills in Europe? or is it that such work has now become unattractive to them.

Chief Economist Simon Rubinsohn reportedly said: “While workloads are still growing at a relatively healthy pace, labour shortages in the construction sector are causing delays at different stages in the development process and leading to significant problems with project planning,”

RICS skills and talent director Sally Speed added:  “The construction skills crisis is slowing growth in a sector that is vital to UK plc. Unless government looks to address the problem urgently, some of its key housing and infrastructure programmes could soon face crippling delays and spiralling costs.”