Worried about your 2016 targets? 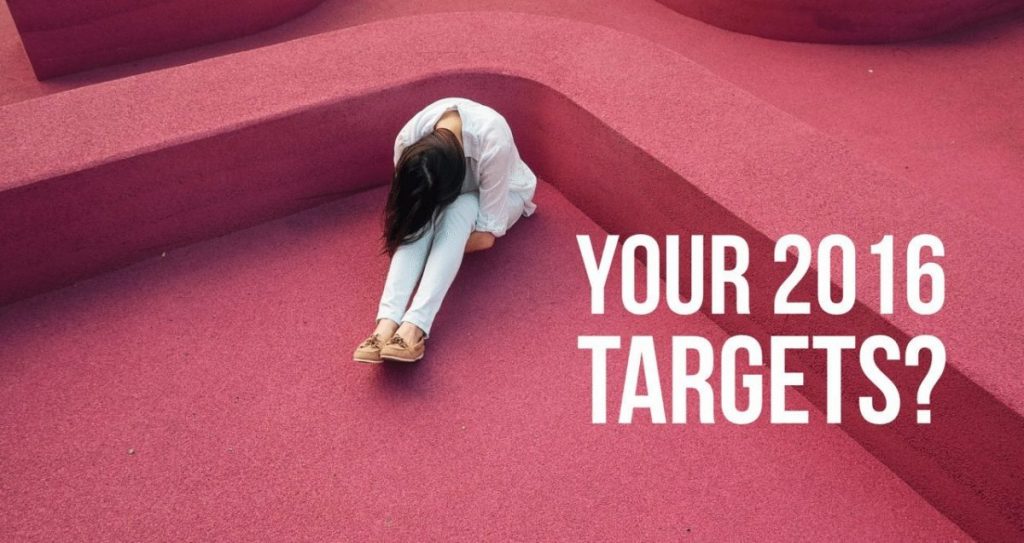 When I worked in estate/letting agency, on the front line, I hated the first day back after New Year, everything was reset to zero, all the numbers… just like pressing that button on your cars odometer to get it back to zero (The odometer is the display that indicates distance travelled by a car .. ie the mile-o-meter as my Mum calls it!).

If you had a cracking year, pressing that reset button was really hard .. and if you had a bad year, sometimes, it couldn’t come soon enough.

Let me tell you my thoughts on this, something I have learnt only recently and something i want share with you.

If you think about it, all a year is a one complete circle of our watery rock called Earth, rotating around the big yellow globe in the sky, called the Sun.. and that journey takes 365 days … and each of those 365 days is just one rotation on the Earth’s axis. Each day is a another day and every day we get out of bed, yesterday is well yesterday .. we cant get it back .. it is gone, never to come back…. and that is how in some ways we should see last year verses this ‘New’ Year

I have always thought that by having these ‘new ’days and ‘new ’years, I was given the ability and opportunity have another go, a second opportunity .. but this time to try and get it right. You might think I have my head in the clouds but I genuinely believe it is like somehow, it’s necessary…. necessary to get better, to do things better. You owe it not only to yourself, but your team and most importantly to your family. You see the past is gone – never to return. Nobody knows what the future holds. So if you think about it .. all we have is now.

… and that is the thing – it is what do we do with ‘now’ that is important.

If all you are doing is blindly resetting the mile-o-meter to zero every new year without learning from the previous year’s knowledge and the experience you gained, that might be the reason you are finding it harder and harder to hit your new targets each year?

Instead of doing the same old thing to try and get the sales, the ‘moveins’ or whatever target you boss has set you, why dont you open your eyes to different ways of working and thinking?

Each new day or each new year on this hamster wheel of life, instead ‘blindly’ resetting your work life numbers to zero, why not use these few days to reflect on what you have learnt in 2015, what went well in 2015, and even more importantly, why you lost certain battles in trying to hit your numbers … and learn from it.

By doing this , you will be a tad more wiser and a slightly better prepared than you were the day before… and do that every day.

You will be better equipped to have another go, to try something new, for the adventure that is tomorrow … and by doing so, you will ​start a new and ​better way of ​working, of thinking and believing, being able to unshackle yourself from those ​bad ​experiences in the past (because you have learnt from them) and start over again.

Yes, and those of you who did well in 2015 – you aren’t being let off the hook – you might have had a great 2015 on the figures, those victorious battles have already been fought and won … but you can’t take those awesome numbers and wins with you in 2016. Don’t get me wrong, hitting your numbers, your sales in 2015 was brilliant ..Well done you – but your mile-o-meter is also being set to zero. What are you going to do in 2016 to make it even better?

.. and those of you didn’t have such a good 2015, the other side of the coin means you don’t need take your awful numbers and losses with you either into 2016. Those landlords or vendors you lost, those sales that fell through, those cr*p months where you didnt hit the target, the 2015 numbers are now old history, water under the bridge – because unless you are Doctor Who, you cant go back in time and change the outcome. … your mile-o-meter is being set to zero as well.

Everyone in January starts from zero … but it was what you do that is important if you are going to make 2016 a good one. What all of you can take with you as you sit down at your desk at 9am, on the first day back on Monday, 4th January 2016 is the knowledge and understanding that you gained from 2015 (and 2014 .. and 2013 etc etc). Learn WHY things went well on certain things and other times it didn’t in 2015 (and ‘14 and ‘13 etc etc). Write them down, talk to a trusted colleague, mentor or friend …. and ask their opinion .. people love to asked their opinion and them listen … listen to every word and them learn from it.

If you had a rubbish or indifferent 2015 and need to zero the mile-o-meter ,.. do it with enthusiasm. Everyone starts at zero in the 1st of January. If you had a great 2016, you still have to hit the zero button – you cant live on past glories .. that was then and this is now .. this 2016. Hit that zero button and do it all again .. but better.

Use these three days of the 1st, 2nd and 3rd of January to reflect on the good and bad of 2015 .. speak to a trusted person and learn from the good and bad ..so when Monday the 4th comes .. you know what to do

Tomorrow is a brand-new day.

And the day after that is a brand new day too, should you need it.

Make it a Happy New Year!