What is Japanese Knotweed?

Japanese knotweed, also called Fallopia Japonica and more recently Reynoutria Japonica, is native to Japan and the Far East where it is known as Itadori. Japanese knotweed is a perennial plant, dying back each winter leaving its canes behind following each growing season. Its appearance is not dissimilar to bamboo, forming dense clusters of canes, with large luminous green leaves and spreading through the soil via a rhizome network. Japanese knotweed is in fact edible, often enjoyed in Japan as ‘sansai’ or foraged wild vegetables. In the United States, the cream-white flowers produced during late summer have also been used as a source of nectar for the production of honey.

Japanese knotweed is considered to be one of the most invasive plants in the world and has caused ecological problems in a number of countries outside East Asia.

In the UK, Japanese knotweed is particularly problematic as the mild climate, fertile soil and lack of native species competition mean that it readily populates areas in which it is deposited. This is particularly true of riparian landscapes i.e. Along watercourses, which provide not only an ideal growing medium but also an excellent means of propagation via carriage downstream of plant and rhizome fragments. As yet Japanese knotweed does not produce viable seeds in the UK and so only moves from place to place through contamination of virgin soil with plant propagules. 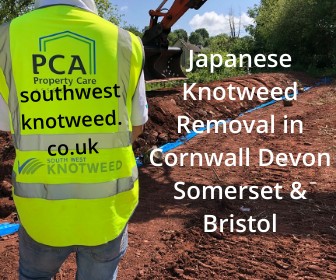 Why is Japanese Knotweed Such a Problem?

According to the Environment Agency, the Japanese knotweed is currently the most invasive, destructive and aggressive plant in the UK. In addition to causing problems on architectural sites, it can also damage flood defences and penetrate weakened concrete foundations.

The main reason Japanese knotweed is such a problem compared to other invasive plants, such as Buddleia – which also damage built structures, is the difficulty in controlling the plant. Whilst one dose of total herbicide will eradicate a Buddleia plant, Japanese knotweed requires years of treatment to attain a measure of control.

Aside from being physically invasive Japanese knotweed has been shown to release chemicals into the soil that further restrict cohabiting vegetation from thriving. This phenomenon is known as allelopathy. The implications of this are far reaching, particularly with regards to watercourses, of which riverbank damage can be swift and vast. 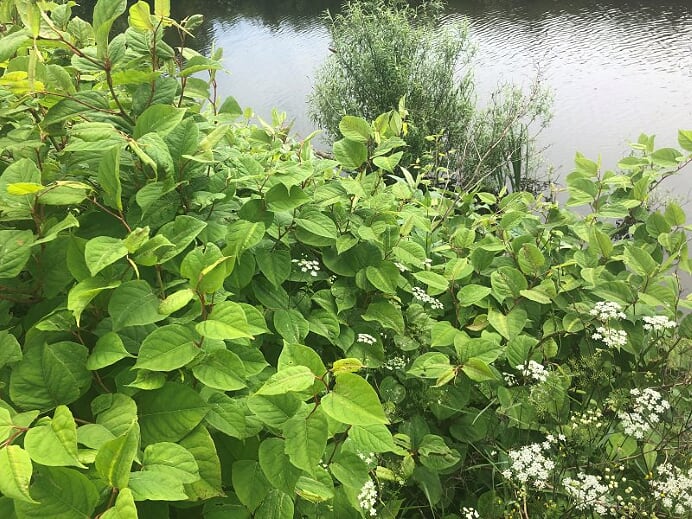 Whilst it is not illegal to have Japanese knotweed growing at a property, it is subject to a number of pieces of legislation. The most far reaching of which is the Wildlife and Countryside Act 1981, Schedule 9, which prohibits the ‘release’ of certain plants into the wild. This has the most impact when considering boundaries between properties, causing many a legal dispute over the years.

Japanese knotweed in recent years has become a real thorn in the side of property buyers and sellers. Where land is contaminated with Japanese knotweed, this area is deemed unusable and restricted space and therefore has an implication to the property in question. The potential of damage to built structures, of which there is little evidence in instances of sound construction, and the above issue meant the introduction of a specific question relating to Japanese knotweed on the TA6 form, provided by vendors during a property transaction. To protect mortgaged assets, many finance lenders began requiring appropriately endorsed management plans to be put in place to control the plant when it is present at a site or property. These plans are lengthy and add certain additional costs to transactions.

How Long Does It Take to Get Rid of Japanese Knotweed?

Whilst the above question appears trivial, there are many variables. If Japanese knotweed is present on a building site i.e. it is required that the plant is removed in order to allow development to begin or continue, the plant can be professionally excavated and dealt with quickly but can rapidly become a very costly exercise. More typically, and generally applicable to property transactions, a herbicide management plan is usually the most cost-effective means of control. However, the time taken to control Japanese knotweed is very site-dependent, the maturity and extent of the plant needs to be carefully considered when constructing a management plan and subsequent treatment regime. In many cases a three-year treatment plan, followed by two years of monitoring will be recommended by a Japanese knotweed specialist. Assuming no new growth is observed during the monitoring period, an insurance backed guarantee can be issued on the works. This scenario is usually satisfactory for most finance lenders, proof that the management plan is in place is usually required prior to completion on the property. So, the first point of call should be to book in a survey with a correctly accredited (PCA membership) Japanese knotweed remedial company and they will be able to offer you all the tools with which to proceed.

What to Do If a Neighbour Has Japanese Knotweed?

As described above, it is not illegal for a neighbour to have Japanese knotweed on their premises. Where the most frequent problems arise is when an infestation begins to encroach onto your property. At this point you are covered by legislation. The best approach is always a cooperative one. Speak to your neighbour and let them know the ramifications if either of you wish to sell either properties. If the neighbour is uncooperative it may be necessary to seek some legal advice to assess your options.

Southwest Knotweed started its journey in 2011, 1st treating Japanese Knotweed in Cornwall and then, soon expanding across the South West, covering Devon, Somerset and Cornwall, offering bespoke solutions within the Invasive Weed Industry. We have a team of highly qualified staff, who will be more than happy to discuss the process and options of dealing with Japanese Knotweed.