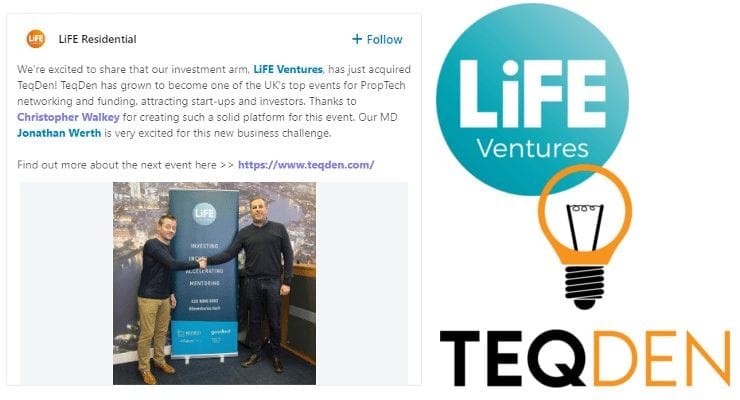 For the last year #proptech start-ups and investors have been using the popular #PropTechDen events that have been held at Google Campus London and also up in Manchester with already some positive results and actual investments taking place during them. This growth in popularity of the #PropTechDen which were bringing in rooms full of keen and active #proptech communities to watch live start-up pitching and Q&A’s has led LiFE Ventures to acquire the concept from founder Christopher Walkey (Founder also of online platforms such as Estate Agent Networking, Marketme and Glass of Bubbly).

“I really wanted to set about helping #proptech start ups to easily find investors by way of live pitching events in rather much then same style as a show on TV which I was part of once, Dragons Den. From just an idea the concept soon grew to where we had outgrown our current hosts main hall at Google Campus and the concept also being highly popular up in Manchester with a growing audience database. I have spent several years in the UK property industry and mostly in the news and marketing side of things which sees me now holding one of the UK’s biggest online communities of property professionals in Estate Agent Networking – It soon became very apparent as the concept grew it would need more of my time, which was limited as my other businesses were also drawing on my time more and more so LiFE Ventures approach to me to offer a purchase and take over came just at the right time.” Christopher Walkey

#PropTechDen which launched in April 2017 brought together a selection of #proptech start-ups to pitch to a live judging panel of property professionals and investors in front of an audience of over 100. These start-ups were each given a 20 minute pitching slot to include Q&A’s from the judges and audience. Already the concept has led to investments take place and start-ups finding adopters within the industry to utilise their products and services.

LiFE Ventures, who were the current main sponsors of #PropTechDen London, are a leading name in UK #proptech with a growing portfolio of investments in the industry:

“LiFE Ventures is the Proptech investment arm of the LiFE Residential group. The group has over 17 years’ experience of managing property investments in London. LiFE deals with over 10,000 clients a year from over 100 countries across the globe and 4,000 investors of which 1,000 are from the far East.” Quote from LiFE Ventures website.