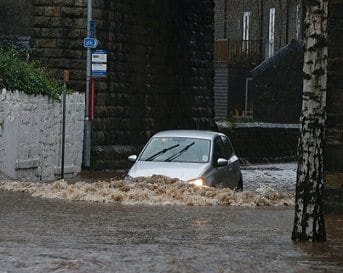 David Cameron pledges a £40m package to fix Britain’s flood defences in areas devastated by storms before and over Chrsitmas, he made this committment following his personal visit to see the damage caused by the storms, Lib Dem leader Tim Farron and shadow environment secretary Kerry McCarthy both criticised the pledge as too little too late.

The Prime Minister reportedly commented on the situation by saying, “I have seen at first-hand the devastation caused by flooding,  that’s why this work to repair and improve flood defences is so vital.

“We are already spending £280m over the next six years to protect thousands of houses from flooding in Yorkshire as part of our £2.3bn investment to protect 300,000 houses across the country. But now more than £40m will be spent to fix those defences overwhelmed by the record rainfall we’ve seen in recent weeks and to make them more resilient to further bad weather.”

The funding comes at the same time it reportedly  emerged documents were shown to ministers in November warning that with extreme weather events becoming more frequent and unpredictable  a long-term approach was needed for flood spending.

As Estate Agents are already faced with a shortage of properties on their books,  those in the areas and surrounding areas affected by the floods now have this problem to contend with,  2016 has not got off to the best of starts for them so far, lets really hope the severe weather subsides and that they get back to normal as soon as possible.

The Met Office has issued severe weather warnings for rain  with a more severe amber alert in Scotland. The Environment Agency (EA)  has issued more than 100 flood alerts and 22 more serious flood warnings across the entire country. The Scottish Environment Protection Agency (SEPA) has 23 flood warnings and three alerts in place over the coming days.