The good news is we have never been here before 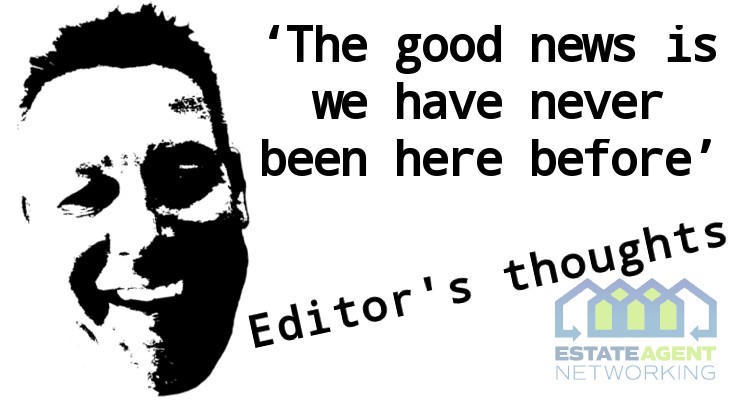 I say we have never been here before; but maybe in the 1760’s when the Spinning Jenny, was invented in England, acting as the starting gun for the first industrial revolution, that was a time very similar to now.

As we speed through the fourth ‘tech’ led revolution, and AI glitters all around us, and IoT magically panders to our every imagining; the rulebook to how we do things and why is being ripped up.

With the start of a new century only twenty-years ago, we have covered a lot of ground, and the explosion of the internet, the mobile phone, and the relentless doubling each year of the reach of technology, means we are somewhere we have not been before.

The very fact that a number of vaccines have been developed in months, and the largest programme of safeguarding the nation is rolling out as I speech, should I hope be seen as a metaphor, that estate agency will never go back to how it was, and that is a good thing.

My guilty secret though is I hate change. I may be the property technology evangelist – seeking to help everyone digitally transform their businesses and processes, at the same time having been a former agent for thirty plus years understanding the resistance to change from the old guard. But I still get grumpy adopting ‘new stuff’.

In a way we all fear change, yet if you look back on your life, change is our only constant. When I was a bright-eyed negotiator, I looked into the rear-view mirror of my shiny Uno45 and no-one was in the car, a year later I looked into the same mirror in my BMW and though there is no-one on the back seat, there was someone on the passenger seat next to me.

Years pass and as I adjusted my rear-view mirror in my Jaguar three new heads can be seen in the back of the car. Fast forward many years and I have no car, so no mirror, just a bicycle with a dog chariot behind it for my favourite four-legged passenger Zara, who howls with pleasure as we descend hills at 30mph.

What I am trying to say is that everything is always changing, you can not stop it, most of the time you are too busy to see the tiny changes, so stop worrying about everything and take the opportunity to plan the sort of life, and the sort of work that you want to do and partner up with those who can best help.

Mostly though, understand that a benefit of being around in the 2020’s rather than the 1760’s is that there are lots of tools, SaaS and hardware out there just waiting to make your life easier, both at work and play.