Landlords to face jail who rent to illegals. 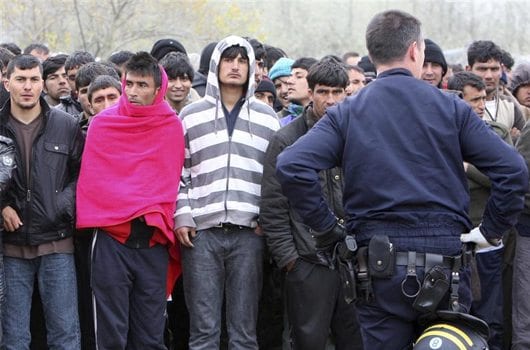 Illegal immigrants are the focus of a new governemnt crackdown shortly to be included in a forthcoming  Immigration Bill, landlords who fail to evict migrants who do not have the right to live in Britain could be jailed for up to five years.

Stronger powers will be given to Landlords who will be able to evict illegal immigrants without a court order, this  should make it easier for them to be removed when their visas expire, ensuring that residency status of tenants is in order will be the responsibility of the landlord and it will become a criminal offence for repeatedly failing to conduct checks which will carry maximum penalties of five years’ imprisonment.

Communities Secretary Greg Clark said the changes will “crack down on rogue landlords who make money out of illegal immigration, in future, landlords will be required to ensure that the people they rent their properties to are legally entitled to be in the country,”

He went on to say “We will also require them to meet their basic responsibilities as landlords, cracking down on those who rent out dangerous, dirty and overcrowded properties.”

Landlords who break the law or the letting agents acting on their behalf will be blacklisted so that councils will be able to monitor them and potentially ban them from renting properties if the situation persists.

All this comes in response to the immigrant crisis in Calais which has reached a peak in the last few weeks,  the migrants have been persisitently trying to breach the barrier surrounding the channel tunnel terminal in Calais, numbers of illegal immigrants have made it into Britain on a nightly basis. Operation stack has caused caos at Dover and the M20, lorry drivers and tourists have had their lives made a misery by the continuous disruption. The governments of both countries Britain and France have been slow to act, it appears they are now  making joint efforts now to deal with the ongoing situation, however it has been a poor show up to now. There was reports of some protest by locals at the port of Dover over the weekend to highlight the problem and also reports (unconfirmed) that a certain strain of tuberculosis being carried by these illegal immigrants has found its way into Britain.

My tuppence worth is “wake up Britain” the government needs to act alot stronger and faster when dealing with the protection of the country.